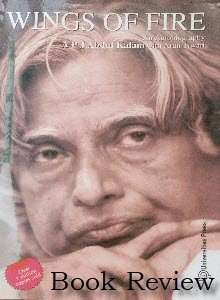 If I have to define Dr. APJ Kalam in one line, I would say “a man of humble beginnings and plain life.” He carried an odd mixture of religious convictions with the soul of scientific inquiry. In 1931, he was born in Rameswaram, Tamil Nadu and belonged to the Muslim community. In the world, Kalam was also known with a name of “Missile Man” of India to the world.

Dr. Kalam’s worked with different Indian government organizations which work in the field of defense and space, i.e. Defence Research and Development Organization (DRDO) and the Indian Space Research Organization (ISRO). During his life span, he delivered some of the very advanced and breathtaking scientific feats of independent India to the people.

His knowledge in rocket science and space technology has driven India to become a shining star for youthful countries wanting to stamp their understanding and skills not just over the globe. Some first pages of this book give tributes to his family and especially to his mother.

Let’s don’t waste any other moment and head over to the book review.

Kalam as a Boy

The first portion of the book is all about the life span of young Kalam. There’s a variety of his interactions with his loved ones, friends, and educators. The content of the book is filled with various monochrome pictures like learning from educators, upbringing from Rameshwaram, and many more.

Some aspects of his early schooling were also included in the book like when he was doing a diploma in Aeronautical engineering from Madras Institute of Technology.

Kalam grew up with a mixture of Hindu as well as Muslim culture. However, he was born in a Tamil Muslim family, but still, he loves all religions and their culture.

When Kalam was a young boy, he used to sell newspapers to help his brother and also to reduce their financial struggles while accomplishing his education. In Wings of Fire, the demand and support of friends and family are praised, and it turned out to be the cornerstone of Kalam’s lifetime successes.

Kalam in his Professional life

In the next part of Wings of Fire, the writing concentrated on his advancement as a man of science and invention. The content provides us an insight into his work with defense and space projects.

After completing the schooling, Kalam’s professional life starts with the Defense Research and Development Organization (DRDO) where he had been provided to work on Hovercraft project.

After working with DRDO, he joined the Indian Space Research Organization (ISRO) where he had been mentored by intelligent minds of Science and Technology such as Professor Vikram Sarabhai, doctor Werner Van Braun, along with Professor Satish Dhawan, and many more.

While working with DRDO, he loves to take part in several satellite launches throughout his stint. In 1980, he was the manager of SLV-III project which is India’s first indigenous Satellite Launch Vehicle.

At this part of Wings of Fire, he tried to create a path into the world of science and technology. The book also mentions some of his interactions with all other colleges and the ordinary people related to the organization as well as the outside world.

Wings of Fire Book: Kalam as a Scientist

Back in 1982, Kalam joins the defense labs again at the DRDO as a Director. During his tenure, he was the primary member of some most incredible scientific advancements of India like PSLV (Polar Satellite Launch Vehicle), most essential missile programs like Akaash, Naga, Agni, Trishul, and Indian Intercontinental Ballistic Missile series.

He uses the same missile technology to produce some of the most excellent healthcare products. Kalam is more than a scientist to the people of India. Due to missile achievements in his life, he got his name as a Missile Man of India.

The section pays tribute to the best Indian scientific minds and has a pleasant and nostalgic feel for this. Several screenshots or pictures of Kalam and his colleagues were added in the book to provide a better insight about his life to the reader. These pictures let the reader imagine some phases of his life.

A lie which Amma constantly told her followers that she was free from the curse of monthly periods, is no more lie for Gail. The truth was out for her that guru is nothing but a common woman like everyone else but she is best at making fool of gullible people i.e. followers.

Kalam as a Contributor

Where the last part ends, a new phase of Kalam’s life took place. In 1992, He became the scientific advisor in India’s Defense Ministry. Now, it’s his turn to give something back to the society what he owns for years. This phrase doesn’t mean that he has to offer his property or money to the community, which he never has but the knowledge and experience he has gained through years of experience.

You may have heard about the nuclear test conducted in Pokhran, Rajasthan which shocks the entire world and gives a clear image of “what India is capable of,” Kalam was one of the vital members of this team.

Kalam has been awarded India’s top three civilian awards, i.e. Bharat Ratna in 1997, Padma Vibhushan in 1990, and Padma Bhushan in 1981. Also, he was glorified with honorary degrees from more than 30 universities around the world.

Conclusion of Wings of Fire

The Wings of Fire book is a journey of a common man who born in a working-class Muslim family to becoming India’s president, and the autobiography is widely regarded as one the most inspirational of its own time.

It’s an outstanding tale of an ordinary person with exceptional talents. Also, this book narrates a journey of a far-sighted leader whose actions are far louder than his words.

He lives in a country where communal riots are ordinary, and bureaucrat’s paralyzed the system with corruption and greed. In spite of all, he gives his entire life to his nation.

This book is not only a biography but also a motivational story written to showcase patriotism and devotion for his country as well as its people.

It is a must read for those people who want to do something for their country and its people.

Readers Reviews on Wings on Fire

The first autobiography I’ve read, and I really enjoyed it. Dr.A.P.J. Abdul Kalam is a source of infinite pride and inspiration for every aspiring youth and in particular, young scientists.
A really motivative book that gives us a glimpse of the two sides of a bright golden coin, one is Dr. Kalam as a fine, compassionate, humble, optimistic, and highly respected human being, the other side, an extraordinarily skillful, imaginative, and a 100% dedicated scientist and a leader.
These two sides combine together and the result was, a phenomenal personality and a true leader, …… Dr.Avul Pakir Jainulabdeen Abdul Kalam!!

I’ll recapitulate this review with just one poem-